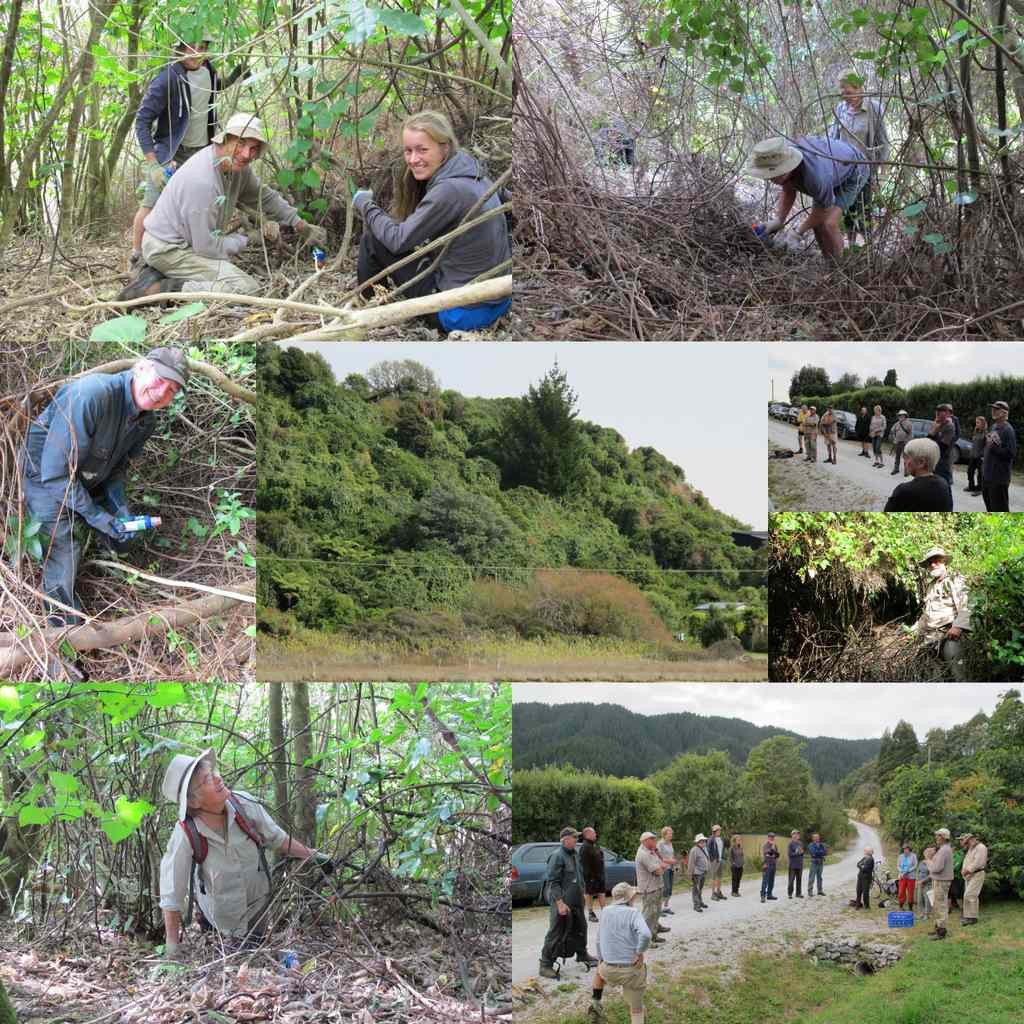 Over 20 people attended the working bee on Saturday at Tata Peninsula to help the owners of the hill there to start to clear the pest vines, banana passion vine and old man’s beard, from the regenerating native trees. Over 1000 vines were killed in the morning. Big thanks to all who participated, to the sponsors of the working bees in general: Cut’n’Paste – Waiheke Island (who gave us a very generous deal on buying the glyphosate pottles), Nelson Building Society and Golden Bay Garden Centre and to Golden Bay Kayaks who sponsored this particular one.

This is the start of the Ligar Bay to Wainui project for which Project De-Vine has received funding from the Biodiversity Condition fund to establish an active community of owners working to clear their pest vines. This will eventually complete an area of pest vine cleared land from Rameka Creek to Wainui and compliment the work being done by Project Janszoon in Abel Tasman National Park.

Soon Project De-Vine team staff will start to do the assessments of how much work is required to help owners with large numbers of vines. Once all the data is collated, they will be seeking funding to start the main work – which is expected to take over one year. It is a complicated process to find all the owners and also collect up all the contributions of the owners, which must at least match the funding application value. Each hour of volunteer work is worth $15 towards the funding, plus the cost of any paid workers.

This working bee is complementing the recent pest vine work along the coastal strip, around Tata Peninsula, on TDC and QEII land, which was done by our experienced climbers. This is part of the strategy of working on public and badly infested lands before the funding comes to show what can be done and teach owners the best ways to manage large areas of pest vine infested land.

The fully sponsored micro-weedbusting scheme is doing well and a newly formed group is having their first working bee on 12 April in Patons Rock. Watch for details in the media and the DOC office window. This is a great chance for many landowners to band together to deal with these very invasive vines. Like Pohara and Wainui, Patons Rock also has climbing asparagus vines starting to establish on a few properties there and we will be showing the vine to all who come, asking them to watch out for it and explain to them how to manage this sneaky garden escapee.