As a former Whakanewha Regional Park ranger, Onetangi resident Andy Spence knows a bit about the tenacity and nuisance value of weeds.

He is also aware of many people’s concerns about toxic weed sprays.

He has managed to produce a weed killing gel containing the natural ingredients salt and acetic acid.

“I developed it for people reluctant to use non-organic herbicides because of fears of chronic long term toxicity,” he says.

Cut ‘n’ Paste organic gel is systemic and effective when used as a stump paint.

“It can also be used to burn off leafy weeds when used as a leaf paint, but is not systemic when used in this way.”

The gel contains 30% acetic acid which is six times the strength of vinegar.

The gel also contains common table salt which helps in the effectiveness of the acetic acid.

“This combination of vinegar and salt has long been known as an effective weed burn off,” he says.

The difference with the organic product is the much higher concentration of acetic acid and its use as a gel applied to cut stumps.

It can also kill large weedy shrubs and trees like woolly night shade, gorse and privet.

He says application must be very thorough to achieve good results.

“It must be liberally applied immediately after cutting a tree or shrub weed stump close to the ground.  You need to apply it several times as the gel is absorbed into the

The product is not available for use in the home because it’s caustic to the skin and eyes.

However, it can be purchased by approved community-led projects through the Department of Conservation, Auckland Council and other environmental groups like Forest and Bird. 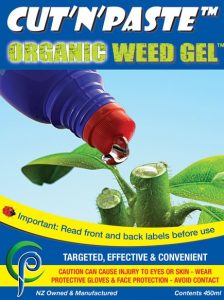