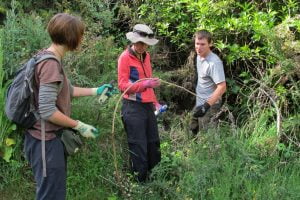 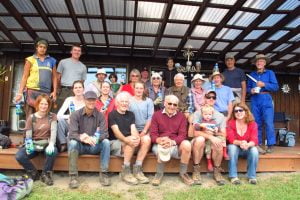 “Clearing the pest vines out of Golden Bay

and around Abel Tasman National Park”

Twenty three people split in to several groups to tackle the slopes of regenerating native trees, which also includes a long gully with large trees and a 400 year old protected matai. Chris Rowse, Project Leader says “This first working bee is to show the local population how to deal with vines by the “Cut and Paste” method and supply free bottles of gel to kill the vines on their own or other properties. The bottles and expenses are covered by our sponsors – Nelson Building Society, Motueka Community Board and Cut’n’paste – based on Waiheke Island who supplies the gel at very generous rates. We want to show landowners that it is possible to control large numbers of pest vines which often appear overwhelming. We have achieved this in Golden Bay on many properties. In conjunction with Project Janszoon, we are working around the boundaries of Abel Tasman National Park to achieve more control of pest plants.”

“Large old man’s beard vines made an ideal training venue to show how to ‘cut and paste’ the vines” says Emma Steven, Project De-Vine’s Assistant Manager, who organised the working bee. “Identification to distinguish the pest vines from native vines was new for some of the volunteers. This was a perfect location to appreciate how much diversity there was so close to the orchards just below.”

The landowners, Doug and Debbie McDonald, were very happy to have some help to lower the large numbers of pest vines on their property. “To see how to kill the vines was very helpful. Now we feel empowered to carry on the control work to help protecting this area of native forest” said Doug, who did a great job ferrying people and tools up and down the slopes. Debbie and Robyn Janes, from the second property, provided a large platter of scones and drinks to keep the enthusiasm of the team going.

One of the highlights was the enthusiastic group that came over from the Nelson area, which included Biddy Myers, whose birthday it was that day. “I chose this as my birthday trip to help. We’ve had a fun and productive morning here” she said, accompanied by her husband Adrian.

Motueka High School teacher Heidi James brought some students from the environment committee and fellow teacher Nick Wiffen came with his two sons. “This was a great way for the students and myself to see what good we can do close to our homes. We saw how the seeds from invasive plants can affect native forest – some of the vines were enormous” said Heidi. She is keen to bring more groups to future working bees. Nick’s sons discovered a talent for pulling out the seedlings vines, once they learnt how to do it.

The next working bee is planned for Saturday 28th November in the Riwaka valley. Details will be announced soon.